Is the Ebola virus outbreak being used as a tool for the New World Order? It would seem so. If Ebola was created in a lab (manufactured problem), to create a reaction (viral outbreak in targeted areas), and now the US is sending thousands of military troops to swoop in as the saviors (solution), then the agenda is becoming clear.

Doesn’t it seem obvious where this is leading? If you examine all the examples in the past of how they have used crisis as an opportunity for their agendas then this situation is another clear example in the making.

“You never want a serious crisis to go to waste. And what I mean by that is an opportunity to do things you think you could not do before.” – Rahm Emanuel

Let’s examine some of where this has come from and what’s currently happening.

US to send 3,000 troops to Africa to fight… Ebola crisis 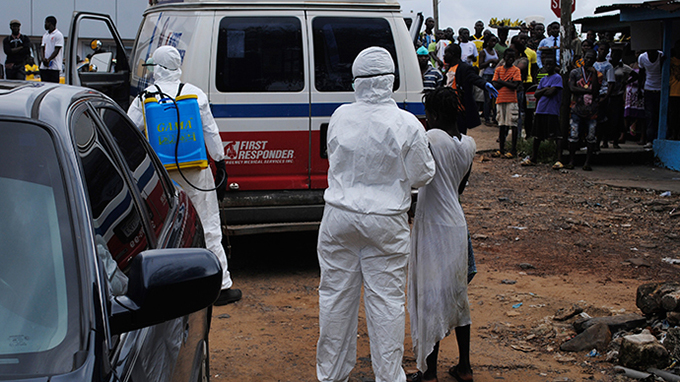 Out of 5,000 people infected by Ebola in West Africa, 2,500 have died of the virus, the World Health Organization (WHO) said on Tuesday. To combat the situation, the US announced it would send thousands of military personnel to the region.

In a short speech given at the Centers for Disease Control and Prevention (CDC), President Barack Obama announced what he called “the largest international response in the history of the CDC.” The president said that although the possibility of an Ebola outbreak in the United States is “extremely low,” the epidemic is “spiraling out of control” in West Africa and requires a strong response.

“If outbreak doesn’t stop now, we could be looking at hundreds of thousands of people being infected,” Obama said.

The president’s statement echoed that of WHO Assistant Director General Bruce Aylward, who earlier in the day said, “Quite frankly, ladies and gentlemen, this health crisis were facing is unparalleled in modern times.” Announcing the number of deaths and people threatened by the virus, Aylward said, “we don’t know where the numbers are going on this.”

Speaking at a news conference in Geneva, the WHO official said a previous forecast of up to 20,000 cases “does not seem like a lot today,” adding that numbers can be kept in the “tens of thousands” if there is a much faster response to the outbreak.

The US, meanwhile, has announced it is aiming to get the situation under control in West Africa, and is sending troops to the area.

Read the rest of the story: RT.com

Obama: U.S. ready to take the lead in Ebola fight

After an in-person briefing from the staff at the Centers for Disease Control and Prevention in Atlanta, President Barack Obama on Tuesday announced a “major increase” in the U.S. response to the Ebola outbreak in West Africa.

“Today, there is not one single bed available for the treatment of an Ebola patient in the entire country of Liberia,” said Margaret Chan, the World Health Organization’s director-general.

“As soon as a new Ebola treatment facility is opened, it immediately fills to overflowing with patients,” the WHO said.

Hospitals and clinics in Guinea, Liberia and Sierra Leone — the countries hit hardest by the outbreak — are overwhelmed by what the WHO is calling the deadliest Ebola outbreak in history.

The virus has killed at least 2,400 people, and thousands more are infected. And there are now cases in Nigeria and Senegal.

“The number of new cases is increasing exponentially,” the WHO said, calling the situation a “dire emergency with … unprecedented dimensions of human suffering.”

Read the rest of the story: cnn.com

The primary Ebola strain being spread right now (as their are 2) was bioengineered by the US Department of Defense (via USAMRIID) & Tulane University with the knowledge/help from pharma/biotech giants such as Monsanto, Alnylam, Bristol-Myers Squibb, Merck, Pfizer and a much smaller pharma company based out of Canada called Tekmira. A known Ebola strain from Central-Africa was used as the base, and was bioengeneered to become a new hybrid respiratory illness (a combination of Ebola Virus & Lassa Hemorrhagic Fever, weaponized via Tulane University & USAMRIID at Fort Detrick) making it become a genetic variant of the original strain. This bioengineered hybrid allowed for airborne human-to-human transmission, an extended incubation period (to increase spread/threat), and a slightly toned down virility (to have the ideal initial wanted mortality rate (~40%)).

Ebola (EBOV) – Human-to-human transmission occurs via direct contact with blood or bodily fluids from an infected person (including embalming of an infected dead person) or by contact with contaminated medical equipment, particularly needles and syringes.

Lassa (LASV) – Inhalation of tiny particles of infective material (aerosol) is believed to be the most significant means of exposure.

Ebola/Lassa (EBOV/LASV) – Human-to-human transmission occurs via direct contact with blood or bodily fluids AND/ORInhalation of tiny particles of infective material (aerosol) from an infected person (including embalming of an infected dead person) or by contact with contaminated medical equipment, particularly needles and syringes.

Ebola Virus was chosen as the base virus for the hybrid due to its high mortality rate and other ideal bio-warfare properties.

(Note: There are a ton of links to explore)

Read the rest of the story: zeitgeist77.wordpress.com 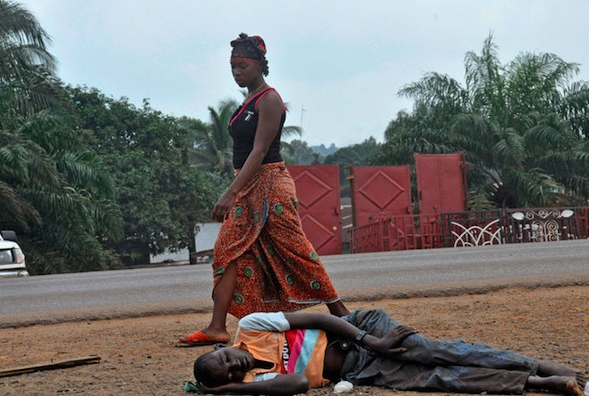 A woman in Monrovia, Liberia, passed a man believed to be infected with Ebola. Researchers say it could take 12 to 18 months to bring the epidemic under control. Credit Abbas Dulleh/Associated Press

Is Ebola Airborne? You Bet It Is!

Hello, Jeff – I was reading the article below and had to comment. So, I picked out the first part and it IS airborne…in the same manner as is TB. The pathogen iS in the fluids and gets expelled into the air when an infected person coughs, sneezes etc.

It will probably mutate and be able to live outside the body. This too, in the same manner as TB. Just as the police got infected with TB in their cruisers after those who were arrested and rode in the cruiser were taken to the police station. We see this spread in police stations, cars, school classrooms etc.

Now the $64,000 question. Why are the politicians and policy makers not talking about an airborne mutation? That is easy and it is not so much not wanting to yell ’Fire’ in a crowded movie as it is to keep the economy going and the money coming in. The politicians are hoping the virus doesn’t get “found out” aka go obviously airborne which anyone watching the situation in Africa knows it already is in the air. In short, greed, keep the secret a little longer and rake in money.

I also notice that 4th doctor (Nebraska) has been getting better (miraculously) and I think and am quite sure that he was given ZMapp. They are not saying as the people in Africa would be insulted by such double standards.

We have the 5th one, doctor from WHO in Emory, Atlanta, Ga. Bet the farm we will hear he or she is miraculously getting better. If you go by the percentages we should have had at least one maybe two deaths among the 5. So, it appears they are beating the odds or they are getting ZMapp. I don’t put any faith in vaccines. A vaccine won’t cure Ebola. What a vaccine may do is make it worse, i.e. spread it further.

If we cannot stop this outbreak in Africa it will infect the world. If it ever gets to China or IndoChina and India we are doomed. We know that Reston Ebola is now in the Philippines and had proven to infected pigs. The experiment in which macaques were infected and kept in cages across the room from pigs and then all of the pigs got infected is proof positive 1. it can go airborne and 2 transmit quite readily between species.

We still don’t know what animal is the true reservoir. It is not primates as they die when infected. It is an animal, probably one that lives near and on rivers as the Ebola outbreaks seem to start near a river. This last outbreak started near the Moa river in Guinea. The virus gets its name from the Ebola river where it first emerged in 1976. I was hoping to go to africa as a volunteer and help with the animal work and research. We must stop it in its tracks in Africa. Imagine if it gets into crowded slums in Brazil? India (India has very little sanitation aka indoor plumbing in many areas of the country. This is why we still have cases of Polio there, and in Pakistan, parts of Africa. Jeff, this is really bad and I don’t have a good feeling i.e. that this will end anytime soon.

Virologists may not be publicly talking about the possibility that the Ebola virus could someday mutate into an airborne strain, writes Michael T Osterholm in the New York Times, but it’s something they are “definitely considering in private.”

The director of the Center for Infectious Disease Research and Policy at the University of Minnesota says that the virus – which currently can only be transmitted through contact with bodily fluids – has proven to be “notoriously sloppy in replicating”, which increases the chances that it could turn into something more contagious.

“Why are public officials afraid to discuss this?” he asks. “They don’t want to be accused of screaming ’fire!’ in a crowded theatre – as I’m sure some will accuse me of doing. But the risk is real, and until we consider it, the world will not be prepared to do what is necessary to end the epidemic.”

A top German virologist has caused shockwaves by asserting that it’s too late to halt the spread of Ebola in Sierra Leone and Liberia and that five million people will die, noting that efforts should now be focused on stopping the transmission of the virus to other countries.

Jonas Schmidt-Chanasit of the Bernhard Nocht Institute for Tropical Medicine in Hamburg told Germany’s Deutsche Welle that hope is all but lost for the inhabitants of Sierra Leone and Liberia and that the virus will only “burn itself out” when it has infected the entire population and killed five million people.

“The right time to get this epidemic under control in these countries has been missed,” said Schmidt-Chanasit. “That time was May and June. “Now it is too late.”

The current Ebola outbreak in West Africa has killed over 2200 people, with Liberia and Sierra Leone accounting for over 1700 of those fatalities.

While calling for “massive help” from the international community to prevent Ebola appearing in other countries like Nigeria and Senegal, Schmidt-Chanasit warns that getting a grip on the epidemic in Liberia and Sierra Leone is a departure from reality.

German aid organization Welthungerhilfe blasted Schmidt-Chanasit for his comments, with Sierra Leone based coordinator Jochen Moninger labeling his statements, “dangerous and moreover, not correct.” However, Moninger acknowledged that Schmidt-Chanasit’s assessment may be accurate in the case of Liberia.

via Ebola Virus; Hegelian Dialectic for the New World Order.

How Putin is Part of the NWO

Snowden is Charged with Espionage, Hong Kong is Asked to Detain Him